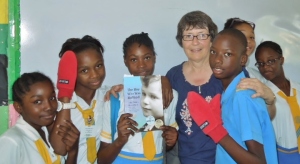 I gave 11 presentations on my book while volunteering at a school in Jamaica in January, 2014.

3000 copies of “The Boy Who Was Bullied” have been sold since the first printing in October, 2011. Any profits from the sale of the book, realized by the author, will be reinvested in Human Rights work for children.